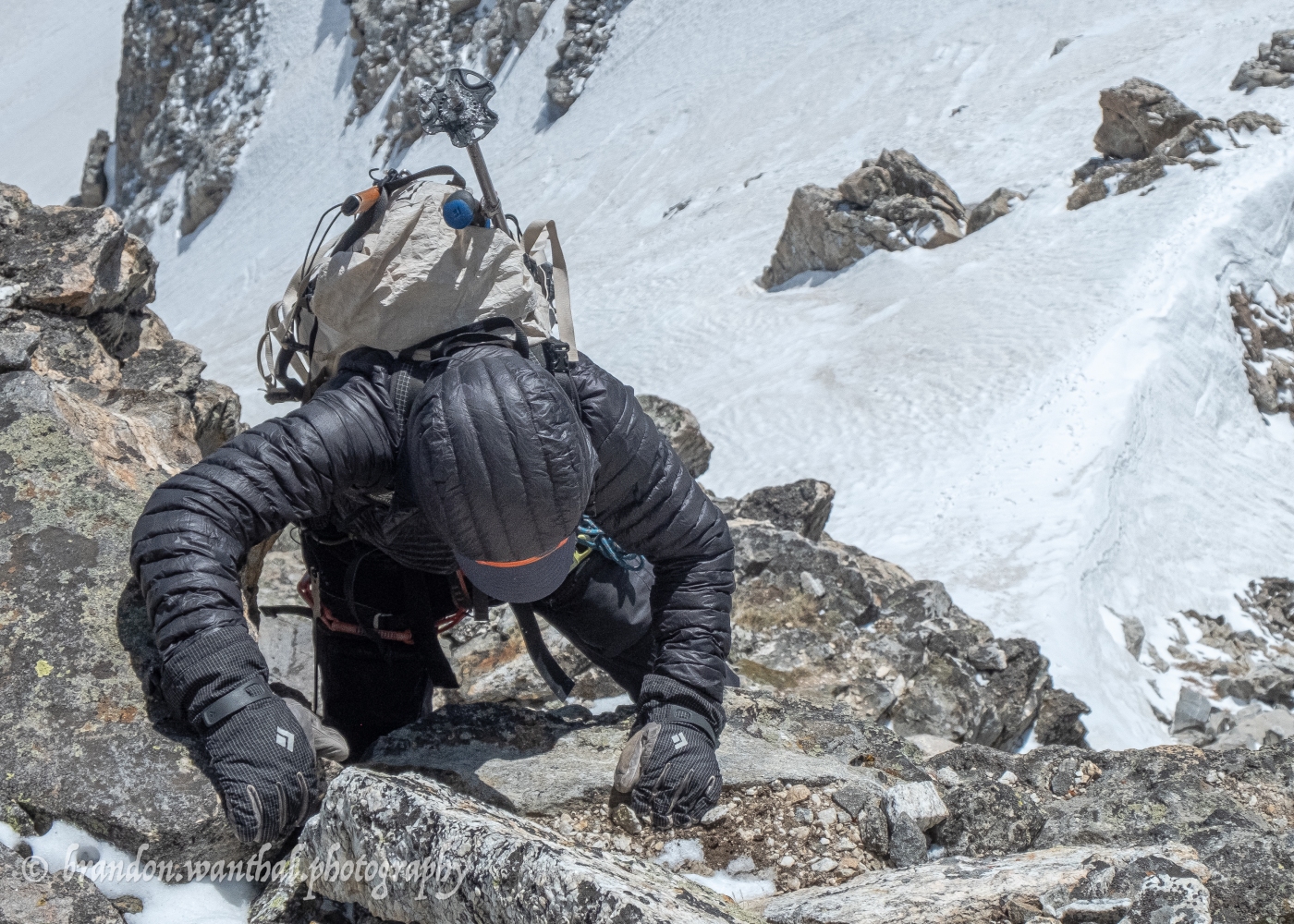 It’s June in the Tetons. For the past few weeks, temperatures have skyrocketed well into the nineties, with alpine highs nicking at seventy. 99.99% of locals have shelved their skis, as dry trails to 10,000 feet beckon mountain biking and trail running alike. The remains of winter, both stoke and conditions, have been almost entirely extinguished. However, in the uppermost realms of Garnet Canyon, tucked high high away, a few select couloirs stand their ground against father sun – so when Andrew Grasso and I got our final itch for alpine turns, we looked no further.

June 11th was the gift that kept on giving. Faced with a hard freeze overnight (temperatures nearing single digits) and daytime highs in the 50’s, we were primed for perfect alpine corn. Our objective started off relatively modest. We packed a light rock rack and a short twin rope, hoping for a multi-sport adventure on 12,031 foot Cloudveil Dome. A climb of the East Ridge (4th/low 5th class) combined with a ski descent of the classic Northeast Couloir seemed like the perfect way to both welcome summer and celebrate winter. The couloir is on the east (looker’s left) side of Cloudveil, a slightly crooked line that trends east and eventually wanders west at a modest slope angle. With low temperatures on our side we got a lazy 6:00AM start, hitting the meadows by 7:45 on an entirely dirt trail. Skins took us up the South Fork, and low angle bootpacking brought us to the 11,400 foot Cloudveil-Nez Perce col around 10:00. Despite rapid warming, the snowpack seemed unaffected, bomber and consolidated. With dry granite above, we pulled out the harnesses, stashed skis and began questing up the East Ridge.

Our paced steadily slowed from hustle, to thoughtful, to a screeching halt. Third class quickly became fourth, and with the main gully packed of snow, we were quickly forced onto class five terrain on exposed slabs to the north. With rock shoes we wouldn’t have thought twice, but with wet soled mountaineering boots our mission became less plausible by the step. We meandered about a third of the route before Drew expressed his concerns. Even with a proper belay our scanty selection of protection and the abundance of loose, untrustworthy rock had us on edge. I was bummed to turn around with the summit in sight, but I couldn’t argue the vibe was off. We retraced our steps with back pocketed egos and reached our skis with instantly reversed spirits – 800 feet of couloir skiing awaited, and the snow looked far too good for June! Unfortunately I scored exactly zero good pictures of the skiing, but alas, we timed the corn perfectly and enjoyed a care-free summer run beneath bluebird skies into to Garnet Canyon below.

Over lunch in the canyon we deliberated. The weather was stellar, the snow seemed heat resistant and our bodies were holding up, a green light to continue skiing. We hadn’t planned on linking any peaks, but armed with plenty of calories we decided to forge on. After our experience on Cloudveil we stashed the rack, harnesses and rope in favor of the light and nimble, and with ten pounds removed we swiftly took off for Grand Teton National Park’s fifth highest peak, the South Teton.

Everything about the South Teton makes it an excellent “tack on” adventure for bigger days. The approach is simple, the climbing relatively easy and the summit well worth the effort. This would be my third time atop the 12,513 foot monster, and the second time with a pair of skis. Unfortunately, today our skis would not be joining us on the summit, as the upper 200 feet of the Northwest Couloir was entirely melted dry. I skied a much more technical line off the South’s direct summit a few seasons ago, but that was Mid-April, and today we could have been climbing in board shorts. Despite the “tack on” stamp, the peak is still far from a simple leg stretcher. As we wound to the back of Garnet Canyon and the afternoon sun began to beat down on my black base-layer, I was reminded just how far away the South Teton is from the Lupine Meadows trailhead. We were greeted with surprisingly firm snow at the apron, requiring a healthy 300 feet of front pointing in 40-45 degree terrain. However, by the gut of the couloir we were stashing skis again, this time staring down a third class, 300 foot romp to the summit. This was Drew’s first South Teton experience, and I greatly enjoyed seeing the grin on his face as we scrambled up the outrageously fun upper West Ridge – to the top of the world!

We down-climbed the route back to our cache and clipped in for another un-photographed ski descent. I know – as a photographer, I am really falling short on this one – but the turns were again excellent. A cool breeze from the west kept the snow much firmer than Cloudveil, so instead of corn we enjoyed cautious jump turns on a bomber crust that softened gradually the lower we skied. Regrouping in the canyon once again, one last couloir taunted us directly south. Sandwiched between Gilkey’s Tower and the unnamed Peak 12,295 to the west, a narrow, “pinner” couloir snaked to a delicate saddle on the skyline. This line was shielded from the wind, instead baking lightly in the late afternoon sun. The opportunity for one last run was too much to pass up – back into crampons we went.

I have certainly never heard an official name for this obscure line, so given it’s aspect, I will dub it the arbitrary North Couloir. Long story short, snow conditions remained firm and supportable for the entire 500 feet or so of bootpacking. In the upper bottleneck the chute narrowed to little more than 20 feet, culminating in a delicately balanced chockstone with a “keyhole” window “opening” to the south. Inspiring views of bizarre lines below, including a convoluted ledge system I skied earlier this year on Matternought Peak and the gully beneath the Southeast Couloir of the South Teton, sparked adventure ideas for years to come. No longer enthralled with exposed scrambling, Drew watched as I clambered around Gilkey’s Tower for several minutes trying to engineer a safe route to the summit. I ended up conceding to a 5.4 hand crack, mostly for the fear of down-climbing technical rock, in ski boots, with a multi-thousand foot tomahawk consequence should I slip. Like an over-caffeinated child I scrambled back to the saddle and immediately started up the unnamed high-point to the west, eventually convincing Drew to follow along. Two minutes later we pulled onto our second proper summit of the day, peak 12,295.

Sometimes the unnamed or lesser known peaks are the most memorable, and today was no exception. In a range as crowded as the Tetons, these less notable high-points provide a tranquil escape from the frenzy. Granted, there were no other travelers in South Fork this day, but Peak 12,295 still felt oddly special, like a hidden gem for our pleasure alone. We enjoyed an expedited break, as the time was creeping on 6:00PM and Drew’s Toyota sat far below. Clicking into skis at the saddle, Drew opted for an ice-axe assisted slip through the bottleneck as I hacked cautious ninja turns. The snow morphed into magical corn on the apron below. Carving and slashing our way with hoots and hollers, Peak 12,295 provided everything we needed in a final alpine run and more – but wait, the criminally overlooked Cave Couloir still awaits!

The Cave Couloir – And A Short Reflection

Any egress of Garnet Canyon’s South Fork, barring unstable snow, should include the Cave Couloir. For the small price of a ten minute detour, a several hundred foot gully, which holds a reliable snow-pack well into late July, awaits. For us, the Cave Couloir wasn’t particularly significant, but the snow sure was delightful. By 7:00PM “The Cave” was composed of perfect re-frozen corn, and with a gentle slope angle we enjoyed a high-speed party lap to the meadows below. I made large slalom turns through the rollovers, all while taking a selfie video for my girlfriend (I do not usually, actually ever, do this sort of thing, but I was feeling particularly jovial and celebratory). We rocketed into the basin below with smiles galore, stopping in the meadows to refuel on water and calories before accepting our final tax on a priceless day – the dirt trail egress with loaded packs and blasted quadriceps. The silver lining was my best Grand Teton National Park landscape photo yet, as a breathtaking sunset shadow of the entire range was projected onto the flatlands below, pitted against the far gentler front-country of the Gros Ventre Range. With a foreground of stunning summer wildflowers, the Tetons, once again, pulled out all the stops. I am truly blessed to call these beautiful mountains home.

We rounded out our day at a healthy 14 hours, with an estimated vertical gain of about 8,000 feet and a linear travel of the 12-16 miles. This ski season was quirky for me. High pressure in March allowed for a few epics, but having to sit April out with a broken wrist, the bulk of my alpine season unfolded in May. Usually I am getting ready to toss in the towel by this time, but after being sidelined during my favorite month to ski, I was bottled up, shook up, and ready to blow. What I found was not only amazing adventures, but a distinctly different mountain environment. The ski mountaineering community had mostly retreated. On high profile peaks such as the Grand Teton, Nez Perce, South Teton and Buck Mountain, I found solace where tracks and bootpacks typically reside. If timed correctly, the snow in May, and even June, can be delightful. Plus, the sheer dedication of hauling skis several miles into the alpine produces a sort-of “hero” feel, the kind of satisfaction that comes with perfection and dedication of and to a craft. Combing alpine rock, ice and skiing is an amalgamation I hope to explore more, and the Tetons are a perfect canvas to paint such adventures. With yet another ski mountaineering season in the books, I am ready for rock shoes, alpine linkups and all things Ten Thousand Too Far – dry land style.

A special thank you to my supporters, Icelantic Skis for all the phenomenal wooden sticks I ride around these mountains, and Chasing Paradise, makers of phenomenal energy bars, purveyors of organic walnuts – and although I don’t personally partake, valley renowned hard cider. A final shout-out to my readers and supporters for keeping the stoke high!