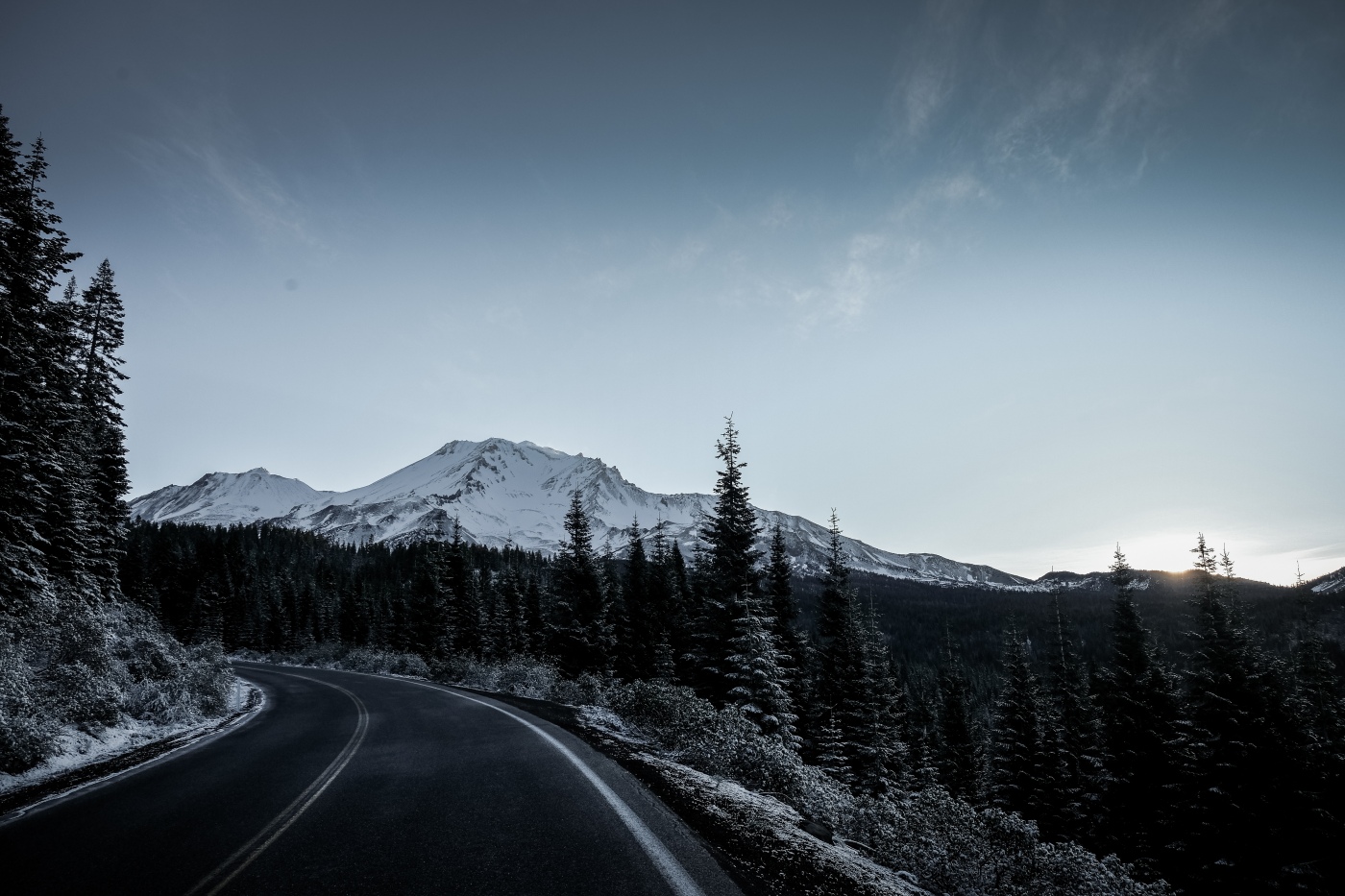 This is the second part of a three part series. Check out part one for descents on Mount Hood’s Newton Clark Headwall, Mount Adams and the Middle Sister by clicking here

After a seamless start to my Pacific Northwest Volcano hopping sabbatical, I found myself at Sister’s Coffee, a quirky cafe in the small mountain town of Sisters, Oregon, waiting out a raining morning. A rest was exactly what I needed. Left to blue skis and my own devices I would’ve certainly kept skiing until my legs fell off, or more likely, took a severe tumble at the hands of exhaustion. Armed with a latte and a delicious vegan Blueberry Scone, I hid beneath an outdoor balcony, replenishing calories and sifting the interwebs in search of my next objective. I had two choices, north or south. North would take me back through the Colombia Gorge and up to Northern Washington, where the likes of Mount Baker, Mount Shuksan and North Cascades National Park lie. To the south was the famous Mount Shasta and it’s lesser known sidekick Lassen Peak, just over the California border. I couldn’t go wrong either way, both options offer exceptional late season skiing. Weather would be the deciding factor, and you can probably guess where the clear skies were. California. Shocker. Four days of sun and temperatures in the mid 60’s sealed the deal. Off to the The Golden State I was.

Dark skies, dime-sized hail and eventually snow greeted me at the base of Mount Shasta when I arrived the following afternoon. I knew something was fishy when I couldn’t see the 14,180 foot behemoth from the road. Furthermore, it was cold. Thirty degrees and a stout breeze felt arctic to my summer-acclimated body. On my radar was both Shasta and it’s little sister to the west, Mount Shastina. While recognized as it’s own USGS summit, Shastina is actually one of four satellite cones that contribute to the massive volcanic complex that is Mount Shasta. The sub-peak holds a lifetime of skiing to it’s own, but when dwarfed by one of the most notorious “skier’s mountains” on planet earth, it rarely sees visitors. In spring or even early summer, particularly on a big snow year, Shasta holds the opportunity for 10,000 vertical foot ski descents, an idea so baffling I hardly believed it to be true, even though it definitely was. The 2020 snow-pack was well below average, so no 10,000 foot rippers were on my menu, but coverage was still very impressive, especially to a rocky mountain skier like me.

Upon arrival I made the short-sighted decision to drag two night’s worth of supplies into Hidden Valley, a high basin between Shasta and Shastina situated around 9,500 feet. A base camp would allow a surgical strike on the West Face of Mount Shasta and Cascade Gulch on Shastina, without having to repeat the three mile dry-land approach. (six miles round trip) In theory, the plan made perfect sense, except for the torrential driving hailstorm at the Bunny Flats Parking area as I was packing my gear. Monday called for bluebird skies, so I figured the weather would taper off as nighttime drew on, but as I climbed higher the snow only got deeper, the winds stronger and the inescapable, fear inducing storm energy more severe. In what seemed like the blink of an eye, I was transported from the warm confines of my trunk to the exposed flanks of North America’s largest stratovolcano, hiding beneath a sofa sized rock as my tent poles were flattened by what NOAA claimed to be 70 MPH wind gusts. After taking a transported chunk of ice to the lip and attempting to shovel out the freshly deposited few inches of fresh snow from the interior of my tent, I came to the sobering realization that I was in far over my head. To spend the night was to gamble on a storm capable of catastrophic damage. The light was setting fast. I needed to get down. Immediately.

“The mountains don’t like agendas” I repeated to myself over and over, while running on the Pacific Crest Trail beneath a crystal clear sky the following morning. The day was truly prefect for a summit climb, but was also ideal for a trail run, especially following the mildly traumatic and majorly exhaustive events of the evening prior. I coined the above phrase while retreating from Shasta, reflecting on the circumstances that led me to such a precarious and potentially dangerous situation. Perhaps it was unchecked ego, but more likely I suspected impatience. The logical choice would have been to follow every other skier in the parking lot’s decision to sleep in the sheltered campground, warm as could be. But no, I had to be the vagabond. I had to be the one to challenge the famously unpredictable micro-climate of Mount Shasta, as a first time visitor… in a three season tent… with no proper snow camping experience. Since the following three days also called for ideal conditions, I took a day of introspection in stride, soaking in the marvelous views of Shasta, Shastina and the many lakes, valleys and forests that make up the Trinity Alps Wilderness to the west. Time to reflect.

Nonetheless, a 2:30 AM alarm eventually sounded, and following a hasty bowl of museli, fresh fruit and hemp milk I darted up the Horse Camp trail from Bunny Flat by headlamp. Beneath an open sky the moonlight radiated from the glaciated peak, creating the brightest midnight I’ve ever seen. The trail into Avalanche Gulch is virtually impossible to lose, a well manicured “National Park quality” footpath with labeled water sources and two dozen signs reminding hikers to “stay on trail!” A few hundred feet past the Horse Camp I hit snow, quickly stashing my shoes and transitioning to skis.

I cruised passed the Avalanche Gulch high camp, passing many folks that were still eating breakfast and gearing up. After getting beat down two days before, I was determined to set myself up for success, and that meant starting early. I passed at least a dozen folks on my climb to 12,820 foot Red Bank, the first significant geological feature guarding the top of Avalanche Gulch. Everyone from 75 year old ski-less mountaineers to first time backcountry skiers donned the slopes, a interesting amalgamation similar to what I found on Washington’s Mount Adams. The common thread between every climber was overwhelming stoke, anticipation and positive energy. As if Shasta’s inherently majestic vibrations weren’t enough, the smile on each and every face I met set the backdrop for a phenomenal day in the mountains. At the top of Red Bank, I joined a party eight, which eventually swelled to twelve, all hunkered beneath a sheltering rock preparing for the exposure ahead.

The final 1,800 feet between Red Bank, Misery Hill and the summit were a brutal battle against another, stronger onslaught of otherworldly winds. One step upright meant almost certain collapse. Instead, to walk efficiently, I resorted to a method of zig-zagging, keeping the wind at my back when the gusts revved to their maximum. The pain of flying ice alone was enough to keep my eyes focused solely on my boots and the next step ahead. The crest of Misery Hill, the 13,840 foot false summit of Shasta, was how I’d imagine the inside of a tornado to feel. I watched most, if not all skiers drop their packs behind, but not me. I was far too stubborn to allow hurricane winds deter my goal of skiing from the true summit of Shasta. Sporting a perfect wind-sail made from two conjoined skis, I knocked off the final 500 feet of crampon assisted climbing, topping out somewhere in the realm of 10 o’clock.

The summit of Mount Shasta is truly a special place. Not only did I appreciate the perfectly angled wind break, but the views in every direction over California and Oregon were ever reaching. The vast expanse of the volcano becomes even more apparent when you’re atop it, stretching outward like a broad pyramid deep into the valleys below. I understood quickly why this particular mountain is the subject of folklore and spiritual practice among st locals and indigenous natives. Nearly 11,000 feet of prominence, two full vertical miles, provokes a certain emotional experience difficult to translate into words. Whether standing on the apex or simply driving on Interstate-5, Mount Shasta does a tremendous job at showing any visitor how small they really are.

From the skiing side of things, our turns off the top were certainly better than expected, but still firm, wind-buffed and spicy. The real goodies came after Red Bank, where Jonathon, a young Colorado skier I met on the summit, and I, slipped through a tight notch into the “Left of Heart” Avalanche Gulch variation. The second my skis dipped beneath the wind line, the snow turned from chunder to powder, fresh, boot-deep, blower powder. I could hardly believe my eyes after climbing through so many hundreds of feet of garbage, I was expecting a battle. Instead, the dreamlike powder lasted for a few thousand feet, supplying an endless dose of effortless turns and drive-able face-shots. Eventually our flurried fantasy turned to punchy iso-thermal slop, but hey, at this point we were a few hundred feet from the trail!

To ski powder off Shasta, an extremely rare delicacy most skiers, even California skiers, never get to enjoy, was the golden nugget of my Pacific Northwest trip. For most of the winter, extreme alpine conditions prevent all but the most hardcore of skiers from traveling anywhere near the summit, effectively ruling out the possibility of skiing fresh snow. By spring the weather ceases and in turn, the snow-pack stabilizes. But Jonathon and I got to have our cake and eat it too. My Mount Shasta experience was one I won’t soon forget. For the record, that makes 50 Classic Ski Descent number six too!

The mountains don’t like agendas. I realized very quickly the root of my suffering in the Hidden Valley. I came to Shasta with an agenda, but the mountain wasn’t ready for me. Instead of accepting the severity of the un-forecasted storm, I tried to assert my will in a place egos go to die. The real world can certainly be more forgiving, but I would argue agendas can prevent people from unique, unplanned experiences. Whether it’s safety or pleasure at stake, setting an itinerary before departure caps you’re potential, a ceiling where one needn’t exist. The mountains, and life as well, can be extremely poor feedback environments, as detailed by Bruce Tremper in his book Avalanche Essentials. “An example of a poor feedback environment is one in which you don’t find out if your decision was right or wrong for a month, a year or longer” Tremper writes. In these situations, like playing on a mountain where the snow is stable 95% of the time***, there is a tremendous margin for negative behaviors to be reinforced. I have taken many agendas into the mountains and had unbelievable adventures of efficiency and non-stop action. Similarly, knocking off bullets on a to-do list is a great way to stay on track while doing errands or preparing for a vacation. Agendas have their place, but just like all things in life, the key is deciphering when their purpose is actually useful, versus limiting, dangerous, or in the case of my Hidden Valley episode, deadly.

Thank you to Icelantic Skis for supplying me with sticks to abuse, and Yostmark Mountain Equipment for keeping them young!