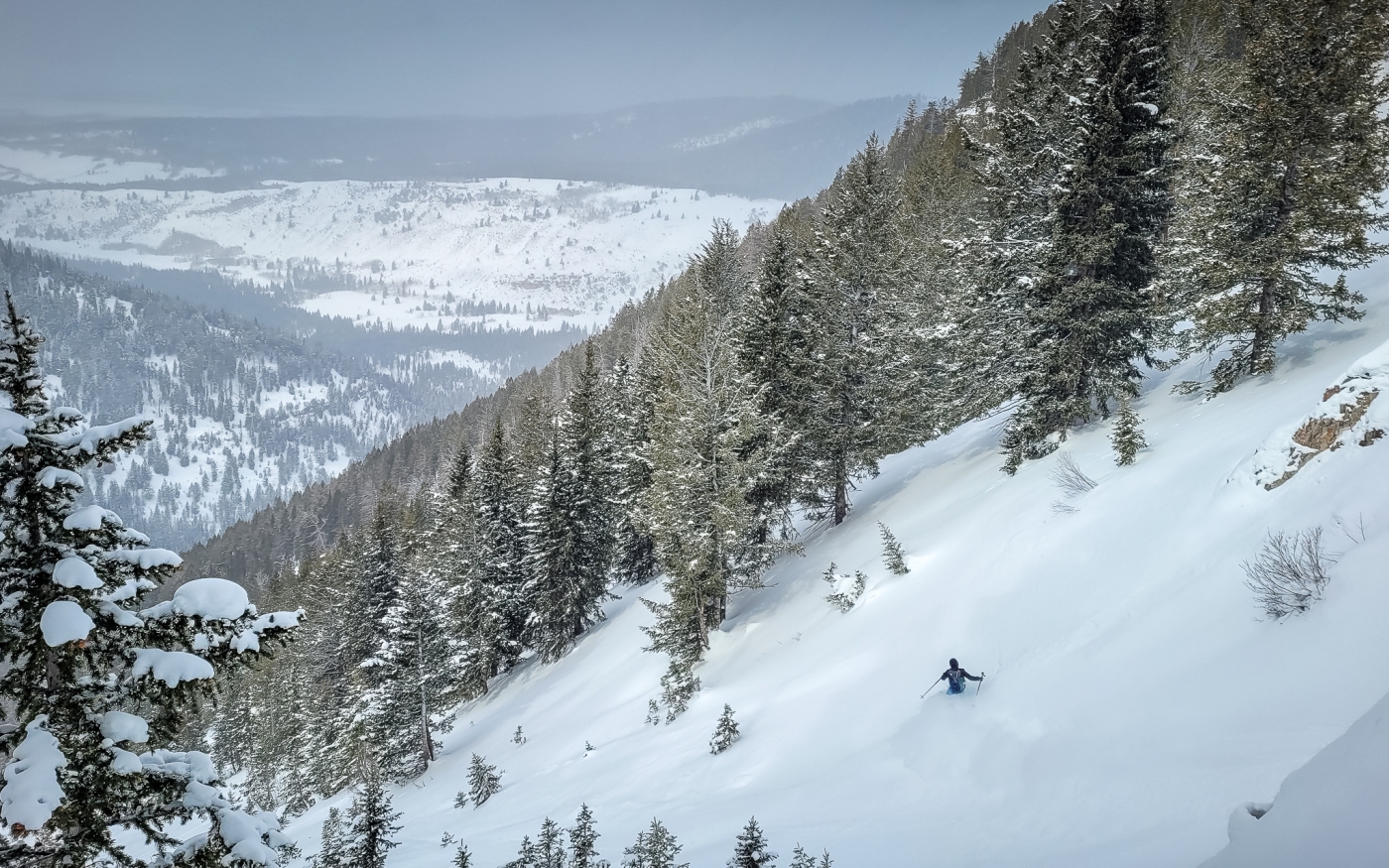 The Eddington Chutes on Treasure Mountain are home to possibly the best fall line skiing on the west slope of the Tetons. After a rapid pulse of snow following 5-6 weeks of high pressure, Reed Finlay and I sought sheltered powder and thought this to be the place. Though phenomenal conditions were found up high, abundant trees and rocks were exposed below 8K. I also got caught in a small but relevant wind-slab avalanche. Read on for a quick snowpack analysis and some photos from another fine Teton day.

Cold and windy has been the name of the Teton game of late. Valley temps have started well below zero the last few days, warming to mere single digits with intermittent sun. In the previous ten days two decent storms rolled through town, providing much needed precipitation paired with rare, and significant, easterly winds. On Tuesday I skied one afternoon lap on Mount Glory and found disappointingly wind-affected snow on exposed slopes of all aspects. A stout crust from a month of high pressure coupled with heavy snow and heinous winds is an optimal interface for wind-slab avalanches. Though recent thoughts have swirled back towards steep couloir skiing, Reed Finlay and I chose to hang low, play conservatively and hunt untracked turns in Teton Canyon. Quite surprisingly, Reed had never skied Treasure Mountain before. I love showing friends around new places, especially ones I frequent and love so dearly.

After gaining Eddington Canyon by way of the Treasure Mountain Boy Scout Camp, We skinned directly up Fourth Shot (northernmost avalanche path, first encountered on approach) for the first thousand feet of our ascent. Progress was frustratingly slow, with unconsolidated snow on the slick January crust causing us to slip every other step and fuss around with ski crampons. Around 8,000 feet signs of small wind loaded pockets began to surface. We experienced light woomphing and settling a half dozen times, eventually ushering us into the trees as the slope angle revved up. Had the snowpack not been so thin we’d never skinned up the exposed chute to begin with, but today Eddington Canyon looked more like October than February. A 2-3 foot snowpack left several trees and rocks to anchor the slope, reducing our avalanche concerns to small and isolated wind-slabs. New to the area? Ascending the broad treed ridge on the south side of the Fourth Shot is the safest and traditional path of ascent.

We topped out the north ridge of Treasure Mountain around 12:30 PM after many hours of frustrating and tumultuous trail breaking. Our original plan was to ski east into Hanging Valley via the rarely skied Forbidden Face, reascend Treasure and ski out the Eddington Chutes, but given the climbing conditions we lost motivation for a second lap. Instead we ripped skins and set cross-hairs to Fourth Shot for some serious powder.

We mobbed through two light feet of blissful fall line powder for the first 1,000 feet, enjoying the steep upper trees and open chute skiing that characterize the Eddington Chutes area. Around 8,000 feet things began to get spicy. Both Reed and I clipped a few rocks, so we traversed south into the trees for better coverage. 500 more feet of powder saw us to tighter glades, corralling us back to the chute. By now the snowpack was so thin and scratchy we were on full scale damage control, simply trying to avoid wrecking our gear. No thoughts of avalanches whirred through my mind until I heard a collapse, saw a fracture above and felt my skis tip out from beneath me. The small wind-slab avalanche was about fifteen feet wide and two feet deep, propagating on the old crust layer above a small cliff. I was carried about a body length before fighting through the crust and self arresting with my ski edges. Thankfully the meat of the slide occurred beneath me. The debris wouldn’t have been enough for burial, but could’ve raked me through a mess of rocks and small trees below. This incident reinforced the necessity to stay on avalanche vigil at all times, even at low elevations, on a very low snow year, on a forecasted low avalanche danger day.

Treasure Mountain… Treasure Mountain… it’s sure had my number this year. Two of my three trips up the beast have produced avalanches. Luckily both were harmless. The Eddington Canyon and Hanging Valley areas are especially rocky and cliffy, more so than any zone I’ve come across in the Tetons. The avalanche I produced this day occurred between two rock bands on a twenty foot wide strip of snow. The initial impact zone that caused the collapse happened at an especially shallow point where the snow was only a few inches deep on a wind swept ridge. Wind-slabs are always most reactive in “unsupported” terrain, namely “rollover” zones and cliffs. I knew this well, but let my guard down in low-elevation, low-angle terrain. The avalanche forecast was reported “low” below 9,000 feet, but as the saying goes, “low danger does not mean no danger.” The worst possible outcome would have been a likely harmless tumble over a very small cliff, maybe a twisted knee or a concussion. But had there been more cliffs or trees below, the outcome could’ve been life threatening. Even Reed, with his multiple decades of Teton ski-mountaineering experience, said he wouldn’t have spotted the pocket. I guess events like these just come with the territory, and highlight the value of skiing with partners on days with questionable snow conditions. All in all, today was another great Teton day for the books. I’ll be looking forward to getting out of the bushiness and back up high as soon as the snowpack and my motivations allow.

As always, I would like to give a huge thank you to my supporters, Icelantic Skis and Chasing Paradise.

If you enjoy and would like to support Ten Thousand Too Far, consider subscribing below and/or leaving a donation here. The hours spent writing these blogs is fueled solely and happily by passion, but if you use this site to plan or inspire your own epic adventure, consider kicking in. A couple bucks goes a long way in the cold world of adventure blogging. I also love to hear your thoughts, so don’t leave without dropping a comment! Thanks for the love.

Enter your e-mail in the box below for absolutely no junk, just new content updates.