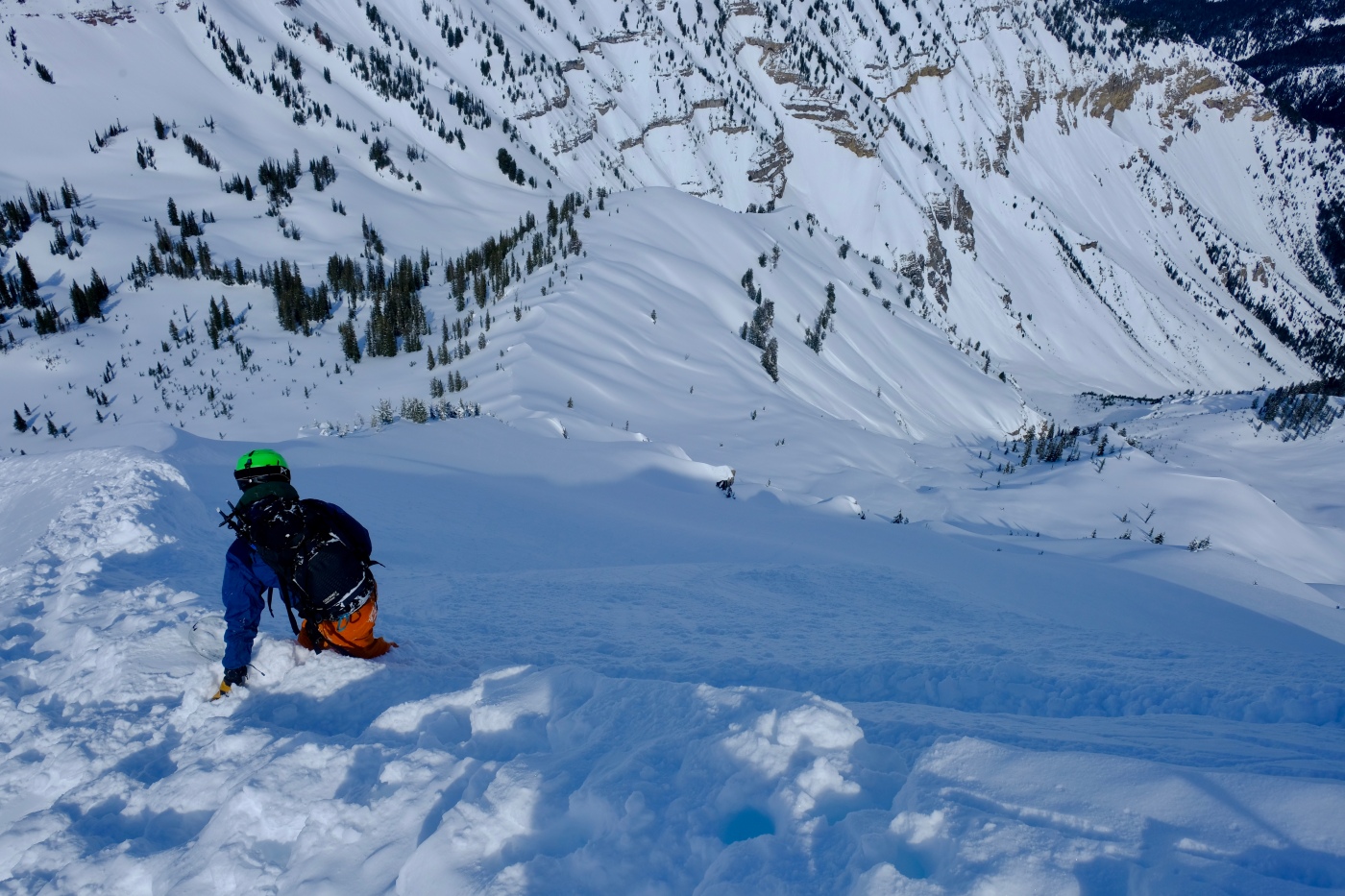 At 10,025 feet, Mount Baird is a stealthy giant buried deep in the heart of Idaho’s Palisades Range. Accessed by a six mile approach up Little Elk Creek, it is rarely skied without snowmobile assistance. Adding gasoline to the fire, Baird is the tallest peak of the range, requiring a stout ~4,500 feet of climbing from car to summit. Described as the “test-piece descent” in Thomas Turiano’s “Jackson Hole Backcountry Skier’s Guide,” the prominent North Couloir in the picture above was the prevailing motivation for the journey. However, with phenomenal (and more conservative) terrain on the west and east slopes alike, I knew a trek out to Baird would be fruitful as long as we put forth the effort. After desperately pitching the remote peak bagging mission to Sam Johnson, emphasizing the possibility of skiing powder and downplaying the multi-hour flatland slog, we set off together from the Palisades Resevoir just shy of 7:00 AM, with light gear and fresh legs.

Six miles on skins almost always takes longer than six miles on foot, especially when you are traveling through a creek bed on chunky, re-frozen snowmobile tracks. After two miles on the access road we came to the summer trailhead, veering right for Little Elk Creek. Many hours later we hit the upper basin separating Baird and Sheep Creek Peak, and enjoyed a quick snack before proceeding up the drainage on the northwest side of Baird. We were happy to find dry powder on the north facing aspects, immediately ruling out the crusty west face. Up, up and up we went, switch-backing through a dense forest until eventually reaching a second basin right below the North Face. As we climbed the snow only got deeper and lighter, bringing a positive affirmation to our mission. The “test-piece” sure was beautiful. Guarded by two cliff bands on the lookers left and an un-skiable cliff on the right, the couloir was definitely the only clean line off the summit; and it was also steep enough to send a tumbling skier multiple hundreds of feet through a natural strainer of sharp rocks and avalanche debris. Excited and intimidated at the same time, we began our way up the prominent west ridge, following the route advised in Turiano’s guidebook. To bypass a series of dangerous cornices, we wrapped beneath the cliffs to climber’s right and ascended a steep mini-chute to regain the ridge. After the slight detour we finished an otherwise straightforward ascent around 1:00 PM.

Concerned about a suspect patch of textured snow guarding the entrance to the couloir, I lead the upper pitch by dropping in on the North Ridge, then traversing in to a rock island where I could safely scout the North Couloir. The line looked beautiful, but with a potential wind slab ready to ruin my day, I called an audible. At this point there was no turning back, so I ventured out onto a very exposed cliff face hoping to sneak into the basin below. No dice. After consulting with Sam I chose the best possible line, jumping a smallish (but bigger than I wanted for a steep face) rock, landing above the lower cliff-band and completing an exposed traverse to a chute filled with glorious powder. Without perfect conditions this would’ve been attempted homicide, as jumping creates significant stress on a slope, carries a much higher risk of falling and increases avalanche likelihood. However, we were the beneficiaries of an incredibly stable snowpack with a consolidated 12-18 inches of new snow, letting us get away with murder. It was for this reason I felt confident venturing onto the uncertain North Face at all. Sam followed suit, sticking the same drop with ease and joining me for some terrific tree skiing into basin below. These were my first turns on a brand new pair of Icelantic Natural 101’s, the company’s newest “ultra-light” backcountry ski, and fortunately they were some of my best! I have a bad habit of testing skis out on gnarly slopes (back in 2018, I first tested a brand new pair of BD skis on the East Face of the Middle Teton, one of the biggest and most exposed lines in the Teton Range… yikes!), but luckily, these skis turned like a dream, the rockered tips keeping me afloat, and the stiffer tails supporting the precarious leap, all wrapped up in an unbelievably lightweight and nimble package; I was stoked! From the bottom we admired our tracks, ate a quick lunch and unanimously voted to head up for a second lap, this time on Sam’s choice, the East Face.

For our second ascent we opted for the North Ridge, following a sturdy bootpack set by the same snowmobile crew that thrashed the North Face a few days earlier. While we wished we had got first tracks on the face, we definitely appreciated the “concrete” staircase to the summit. Spirits high we regained the summit within an hour, stopping only briefly to dig a hand pit and give a few pole whacks to the upper East Face. The conditions off the top were perfect powder, but quickly turned to crust, as expected, below the first cliff-band. We cautiously traversed off the face, opting for a purely north facing “micro-bowl” scoring tremendous turns through two off camber couloirs into the valley below. “Yeeewww”” I shouted, carving perfect “S turns” out of the exit chute while enjoying some of the season’s best snow… in April! Who would have guessed! Lap two in the bag… 4:00 PM… time to go home… at least I thought, until I found myself on the summit one last time, watching the first hints of sunset flood the western sky. After regaining the North Ridge (from the opposite side), Sam bypassed our rendezvous location and continued upwards without a word, knowing I’d be game for a glory lap; and a glory lap it was indeed. The emerging sunset over the Palisades Reservoir was a sight to behold. As evening alpenglow bloomed on the surrounding peaks I took my time relishing our third time atop Baird, snapping pictures left and right before a chilling breeze ushered us to our skis.

Sam chose the upper East Face for his last lap, eventually bouncing back over the ridge and skiing glades into the lower North Face. Much more confident and familiar with the snowpack than earlier, I made two ski cuts on the North Couloir before submitting to temptation and dropping into the “test-piece” for an epic descent, or mostly… epic descent. After a harrowingly steep upper section where I scraped a handful of loosely covered rocks, I connected the same traverse as our first lap and straight-lined onto the apron below where I began to celebrate. I always take a lesson out of the mountains, and today was a sobering reminder of the age old adage; the game isn’t over until it’s over. Score one for Baird, as my right ski nicked a pile of re-frozen avalanche debris and sent me into an aerial cartwheel, from which I emerged ski-less. “You got it where it counted!” Sam was quick to say, as we laughed off my first tomahawk of the season (not bad for April, huh?) and finished off the day with 2000 feet of low angle powder skiing into Little Elk Creek below, following our approach track to within 500 feet of the road. When all was said and done, we wrapped up the day around the 11 hour mark with an estimated 7000 feet of vertical, three laps on the tallest peak of the Palisades and arguably my most confident descent on a steep and narrow line; not too shabby for my first day in a new range!

Loosely adapted from an avalanche safety book, the “winner” in backcountry skiing is not the one who skis the biggest line or hucks the largest cliff, it’s the one who has the most fun, makes sound decisions and returns home safely. I often get bogged down when falling on a big line, after all, every skier whether they admit it or not takes pride in skiing without falling. My first thought after cartwheeling down the belly of Baird, skis flying through the air, was disappointment. “She got me!” I yelled to Sam, picking my gear up, covered in snow. “No, you got her” he said, “that was a sick line, and you got it where it counted!” He was right, the fall wasn’t in a dangerous spot, wasn’t the result of poor decision making and best of all, had nothing to do with the amazing 500 feet of steep cliff skiing before, let alone our other two descents.

In life it’s easy to get bogged down by the small things, especially when they threaten your ego, but when viewed from afar they often become minuscule. And so was the case on Baird, for in hindsight we made all the right choices, returned home safely and had one of our best ski days of the season! Therefor, we were the richest “winners” in the backcountry that day, and to think otherwise would taint a fabulous day in the mountains. My journey to Mount Baird leaves me with two basic but nonetheless applicable thoughts: 1. Don’t sweat the small stuff. 2. If you never fall, you aren’t trying hard enough.

As always, a huge thanks to Icelantic Skis for supporting me with wooden slidy sticks all season long, and to Yostmark Mountain Equipment in Driggs, Idaho for helping with the gear and support I need to get into the mountains! Check them out!